Skip to primary navigation Skip to content Skip to footer

Some of the whales and dolphins seen in our area, and the general migration patterns they have historically followed, are listed below. Links are provided to the American Cetacean Society for additional species information. Sightings, of course, vary from trip to trip, as well as through the seasons. If you want to see all the species possible in this area, you should consider joining us on several expeditions, at different times of the year. 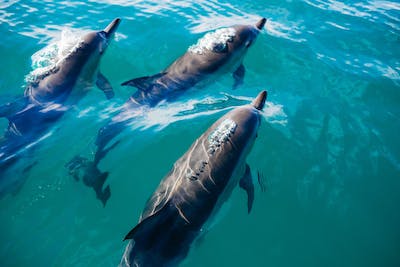 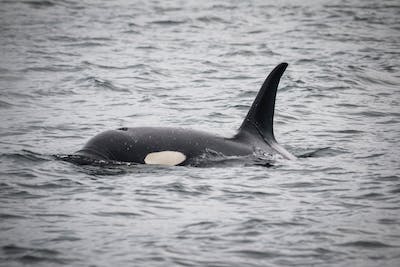 Orcas, not usually resident here, have been encountered in our local waters several times in the past few years. SF Bay Whale Watching passengers met a pack of 40 Orcas in the Gulf of the Farallones in spring 2009.

Adult male Orcas reach lengths of about 30 feet and may weigh approximately 16,000 pounds. Females are around 10 feet shorter and half as heavy.

Orcas are powerful and accomplished pack hunters, consuming a wide range of prey. Transients, such as those sometimes seen off our coast, often eat seals, porpoises, squid, sharks and even, sometimes, larger whales. Resident populations, like those in Puget Sound, eat more fish and fewer larger prey species.

The unmistakable triangular dorsal fin, which may be as long as 6 feet, together with the striking shiny black and white color pattern and white eye patches, make Orcas one of the most recognizable of all cetaceans.

Scientists studying resident Orca populations have learned that each pod (group) of whales uses a slightly different “vocabulary” of sounds, although many sounds are common to Orcas in general—just as English speakers in different regions have developed individual dialects of our shared language. 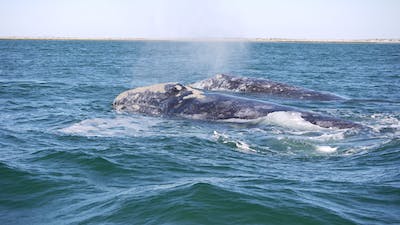 Gray Whales may be seen in the waters off our coast during both their migration from the Bering sea to their breeding areas in Baja California, which begins in October and takes two to three months, as well as during their return trip northward, which begins in the spring and lasts about the same length of time. Additionally, some individual Grays are seen during the summer months off the northern California coast. 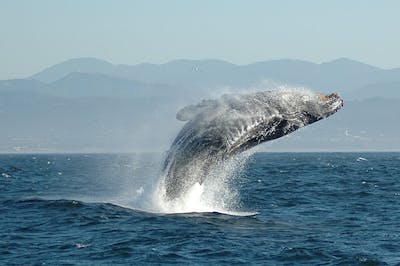 Although sightings are not common (these giants are barely beginning to recover after the destruction of an estimated 99% of the worldwide population), we have recently seen as many as 3 Blues on a single trip!

One of the smallest of the oceanic cetaceans, the harbor porpoise is shy and elusive, not inclined to approach boats and bow ride, as many other species of dolphins and porpoises do.

The harbor porpoise eats non-spiny fishes such as herring, cod, whiting, squid, pollock, and sardines. It seems to require large amounts of food, consuming approximately 10% of its body weight each day.

Harbor porpoises may be seen singly or in pairs, or in small groups of 6 to 10 animals. Sightings have been reported of 50 to 100 in groups that were actively feeding.